As per yesterday's wheat allergy post, really tired of phenergan for awhile. I've had 2 IV pushes in 2 weeks and the most common phrase associated with that drug for nasty side effects is 'corrupt the vein'. Same vein, same place, second person was young and impatient, it went in fast and hard and hurt like crap. I asked her to stop several times. Wonder how many patients she has 'corrupted' being impatient. We're talking necrosis and surgery to fix this kind of stuff when it's done wrong. (Bet you guys didn't know there is a whole branch of science about how intravenous meds affect veins.) So far everything is looking ok, but my whole arm ached for 24 hours. Not to complain too much because I know people who've been through far worse, but that same vein has been blown out during pre-surg prep, ripped open tearing out the IV on a handicap bar in a bathroom, ripped again Thursday getting the IV out, blood everywhere... I'm about ready to get a tattoo down my left arm that says DON'T USE THIS VEIN. There are a bunch of medical tattoos on pinterest, click this if you want to check it out. 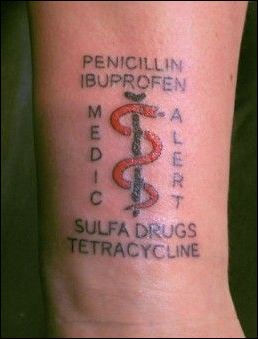