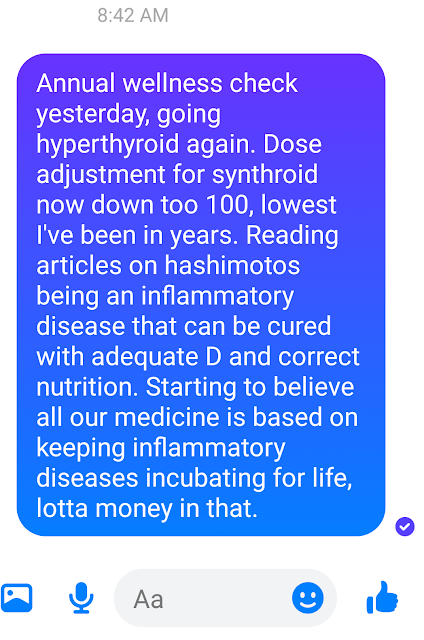 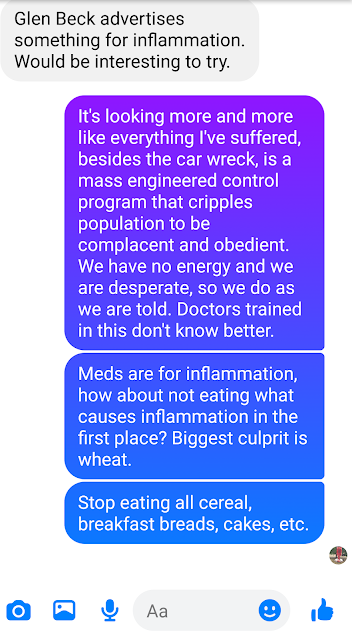 And then I scared myself silly reading articles on thyroid storm. 😳 I allowed a very fat endocrinologist to let me hover around <1 on my TSH for years, and when I got a new doctor last year she started suggesting backing down little by little. Well, she's changed dosage twice, last summer and last winter, and I still keep going hyper, like .29 kind of stuff. I never would have connected the thyroid dot if I hadn't seen that number. I was chalking it all up to IBS causing my palpitations for months. I didn't know thyroid, IBS, and heart issues are a red flag triad, which you'd think I'd be more aware of since I've been on a thyroid med since my late 20s.

I've apparently written way in the past somewhere about a monitored double hormone crash I went through in 2012, starting around Mother's Day and lasting into the summer, but I can't seem to find it so I'm going to write it out again. I had been on birth control pills for years, those raise blood pressure in general while blocking thyroid hormone, so I was on a big load of beta blocker and a pretty high dose of synthroid just to keep things steady for 2 decades. As I aged, I kept getting 'breakout' blood pressure spikes to the point where I was labeled a 'frequent flyer' in the ER and landed solid notes about hypertensive crises. One month got so bad after years of heavy estrogen monitoring to control female problems that a gynecologist suggested getting OFF the birth control, and the next year I had a uterine ablation to stop bleeding altogether. But in May of 2012, simply stopping birth control sent me wildly skidding through super hyperthyroidism, since it was no longer there blocking thyroid hormone, and that in turn super spiked my blood pressure surges, heart rate, and especially anxiety attacks. So, my endocrinologist monitored me also stopping my thyroid pill, and I went into the craziest freefall, monitored by my psychologist. He kept talking me through feeling crazy, through feeling like I had snapped hard into a nasty midlife crisis, because thyroid can affect everything about mood, emotion, and cognitive function. As my thyroid slowly ramped back into normal territory, my blood pressure spikes slowed down and finally mostly stopped. I was put back onto thyroid and blood pressure meds and monitored over the next few months to make sure I had stabilized.

That endocrinologist had me convinced that my TSH could go as low as whatever as long as I felt ok, so I learned to not even concern myself with it. Years of him ignoring my questions turned into my own complacency. Granted, he saved me from a previous doctor that kept allowing my TSH to soar completely off range in the other direction (she also failed to diagnose diabetes, opting instead to pile handfuls of pills into me and monitor me monthly for more antibiotics), but over time he kept adjusting my dose up until I was at the other extreme. Because of my years of learned complacency with him, I've been tolerating a couple of years of palpitations that have become a bit alarming, and now I've got the full range of symptoms of hyperthyroidism.

My newest doctor, been seeing her for about a year now, immediately checked me for vitamin D and found I was very deficient. She also added CoQ10 and has been monitoring several areas of improvement over the year. One of the biggies in my improvements list was being able to get completely off antihistamines after years of dependency. I'm currently getting through what some consider to be a particularly nasty ragweed season without much more than allergy eye drops and occasional nasal spray, not even every day. I'm not fighting snot or experiencing the usual raw throat or anything else.

So now I'm wondering about D and CoQ10 affecting thyroid health and running into articles about Hashimoto's being a curable inflammatory disease with genuinely proper (not govt directed) diet and proper (not FDA directed) nutrients. I'm literally watching my Hashimoto's either getting better or crashing into runaway hyperthyroid. If hyperthyroid symptoms abate by simply adjusting dosage on my synthroid down, I'll be leaning toward healing.

I've written a few times that I haven't had an autoimmune flare since 2014. I've documented across blogs that I made a plan in 2008 to create my own health team and learn how to be healthy. It's taken years to clean off prescriptions and change my diet and deal with getting some exercise in a body that was once granted full disability with many legal restrictions because immobility was so bad, and I've gained enough back to not only actually hold a grandbaby (I dropped everything for years), but to walk the floor holding a baby for a solid month. I have years of blog posts bringing up losing my hands and arms to nerve fail.

So watching my synthroid dosage being adjusted DOWN 3 times in one year is blowing my mind. I'm finding articles other people have written about being able to get completely off thyroid meds because they regain normal function as they cut inflammation down throughout their bodies.

If someone told you it was possible in your older age to get back to normal health, would you believe it? On the one hand, you've got a carefully constructed medical system designed to dismiss actual curing to preferably control illness symptoms indefinitely, regulated by insurance companies that can kill noncompliant careers in medicine, all directed by big pharma, the FDA, and the CDC establishing what is 'good' for us and 'bad' for us and anyone coloring outside those lines is harshly belittled and sometimes (in the case of whistleblowing lab techs and doctors) 'disappeared' or 'suicided'. Once in awhile it's an obvious murder, but it gets buried pretty quickly in our daily (hourly) 'news' onslaught. On the other hand, you've got a few people trying to keep getting the word out that there are real cures, and they are cheap and easy and being withheld from us. Once you take a step back and really look at this situation, it looks really... suspicious. Makes a person wonder if govt control is really about taking care of people, or about something else, maybe. Like a lot of politicians and CEOs being millionaires. And possibly worse- like state control?... We know what state control is in other countries, but would we recognize it in our own?

I keep hearing there are real cures for cancer, too, that don't involve dangerous 'treatment' that costs you as much health as it purports to give back.

One more thing, for you prostate guys, bless your hearts. Have you ever heard of any other organ in your body needing to go through 12 core samples at a time through the most infectious area of your body in a nonsterile office setting? Imagine 12 holes punched into that little bitty organ, how bloody and shredded that would look from the organ's point of view. Imagine if someone did that to any other organ in your body under those circumstances under the guise of 'looking for cancer'. When you really dig, you find out the real numbers in the graphs, percentages of genuine lives saved vs % of men with no cancer at all who wind up incontinent and with ED for life as side effects. Add sepsis to that and I think any of you would be stupid crazy going through that. If a woman had to go through something like that detecting breast cancer, there would be a worldwide uprising, but men keep docilely letting the medical industry rudely shove bad science up their butts.

The word 'science' has been destroyed for me by consumerized medicine. I don't believe in 'medicine' any more. I believe many doctors genuinely care and want to help their patients, but I'm seeing a number of doctors rising up around the world pushing back against a variety of codified treatment options that squeeze out real healing. Do no harm, right? Well, the entire industry does plenty of harm.

Science is showing me that I had two different doctors letting me fall through the cracks. It's time we all started paying more attention to who needs to be taking responsibility for our health care. Basically, we the people. 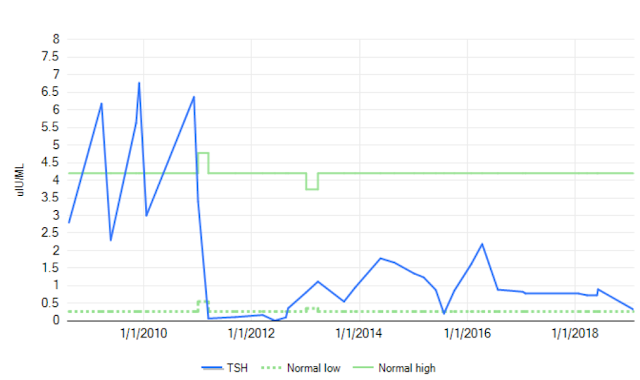 I'm one of the lucky ones lately. I finally have a good doctor measuring the root cause of inflammation in my body as opposed to simply tossing prescriptions at me helping me to live indefinitely with it.

When you find out, after 30 years of that level of 'health care', that all of your suffering through the years could have been prevented, it's on you to not keep going back to that and allowing them to be the boss or your health. YOU are the boss of your body. If you want to learn how to heal and feel better and get well, start researching. Really look. Spend time reading, taking notes, comparing informations, and coming to your own conclusions. They've been keeping us helpless and blind, and although they turn it into 'courageous victories', they also put people through demonstrably outrageous amounts of suffering. When you find out the cancer cure patents being blocked by big pharma contain far less suffering, will you be outraged?

I'm obviously having that looking back moment where I can see now how controlled I was to the point of nearly complete immobility and sanctioned addictions for many years. A few years of physical therapy and a year of vitamin D have done so much for me that decades of medical compliance never did.

I don't know how else to shake other people awake, so I'm telling you my story. If you feel like life is hopeless, I have years of blog posts demonstrating that a person can go from the darkest depressing life of pain and misery to not only hope, but to real healing. I'm not selling anything, I'm not pushing anyone else's products, I have no agenda other than we all really need to wake up and realize what they are doing to us as a mass population. We are so easily controlled through pain and fear, and that part they really do have down to a science. If science seems questionable and lame, it's because the real science is about keeping us complacent and controlled. One could (and should!) ask why and keep digging.

Maybe this is part of a really good answer.