The Darker Side of the Force- Sith Lords and Carpal Tunnel

I think the reason the Force was invented was because of carpal tunnel. Everyone keeps dropping their weapons at inopportune times, just easier to will stuff to fly off a wall than hang on to your lightsaber. The worse your carpal tunnel, the more powerful you become in the Force. 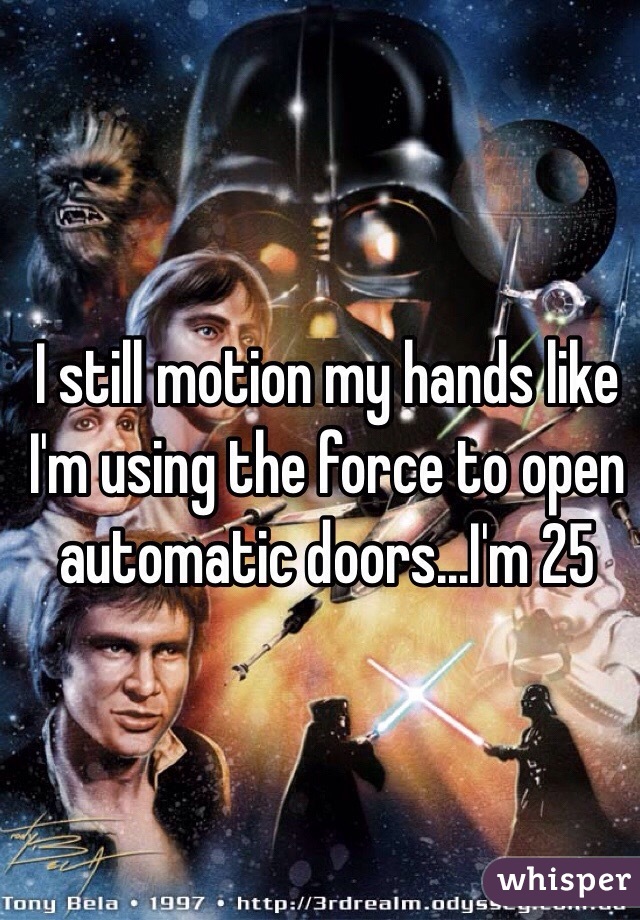 My challenge is eggs. Well, anything smooth and curved that I can't hook a finger on or scoop from underneath well or catch on an angle. But eggs got so bad I stopped eating them. I know what you're thinking, all I have to do is just turn my arm over and cradle the egg till I get to where I'm going with it. BUT, first you have to grip it in order to get it to turn with your hand as your arm turns over... I have dropped so many eggs. It got so bad that I learned not to stoop and clean it up because I'd drop the next one, as well, may as well clean up two at the same time. Or three, you get the picture. Got the bright idea to grab the carton to carry over, dropped the carton, most of the eggs smashed. Use the two-hand-gentle-hug-to-the-chest method and then drop it at the destination. Some days it looks a little spectacular, like I'm tossing them around on purpose. Solution? Don't eat eggs.

Yesterday I learned all about a cool torture called needle EMG testing for if I ever snap and lash out on the world, except I got to learn it the hard way with the needles stuck into me. If you'd like to learn how to torture, as well, here's an intro. Some people make really good money doing this. After a bit of questioning, it became clear to the neurologist that my labor-intensive childhood probably ruined (my word) my hands, because I've spent my entire adult life dropping/throwing things. Years of milking goats by hand (yes, I'm serious), helping move hay bails, holding heavy animals still (imagine your children tangling with animals 4X their size or weight), and hand cranking meat grinders (I beat you all at 'organic living'), plucking mountains of chickens and pitting gallons of cherries, shucking rows and rows of corn and peas- my hands ache just remembering this stuff.


I watch the Food Network for chuckles. I like seeing professionals sweat and freak out in Kitchen Stadium and noobs fall to pieces in competition shows.


Actually went in for my left elbow, which turned out to be, laughably, nothing compared to what I didn't know about my right hand. Never mind that I've been living with every single symptom of carpal tunnel for years now, to the point of not being able to sign checks or tie shoes during part of my 40s. I'm being extremely serious, I literally could not turn door knobs or keys or can openers or even make a pony tail. Never once dawned on me that was carpal tunnel because I've had so much other nerve stuff going on all over my body anyway that I thought it was all part of the same thing. Apparently not. I thought I've been using my hands much better nowadays, can do all kinds of stuff now, so I was very surprised how quickly I crumbled when we started on my right hand. By crumble I mean uncontrollable weeping. (@bonenado would have fainted.) I barely had the power to point my index finger while that needle was poking in my muscle, pushing back was nearly impossible, like all my strength went super fail. I may have broken and confessed a few of my lesser crimes, but I never once slugged the neurologist, as badly as I wanted to. I asked him if anyone had ever hit him, which probably wound up in his notes...

(If you clicked and watched that video and want to see more, here you go.)

Solution for left elbow- stop picking Bunny up, because I keep super fibro flaring around the joint.

Solution for hand(s), YES, HANDSSSS, more surgeries any time I decide I'm ready for them. You know what this means? I'm up to four surgeries now any time I want them. My jaw dropped, b@*#k that. In the meantime, I have been commanded to REST MY HANDS. This means I'll be practicing surprise levitation on random people using only the power of my mind.

I hope to one day recruit an assistant to handle the lesser duties of my Dark Side while I continue to hone my Force choking skillz. In the meantime, every day I'm keyboarding.