I haven't been very bloggy over here, have I? But I do have a few things that need to be noted.

First off, still have hair, yay! Went through a month over the summer where I lost a bit again, have a couple of kinda bare patches, but I think those were the roots resting and now there is new growth coming in there again. I just can't believe it's this long. I don't think it's been this long in over ten years. Again, diet change. Cannot express enough what a difference dropping carbs and adding more protein and some healthy fats has made. No other special anything at all because I'm allergic to everything- can't use product, no special vitamins or natural treatments. Growth starts on the inside. 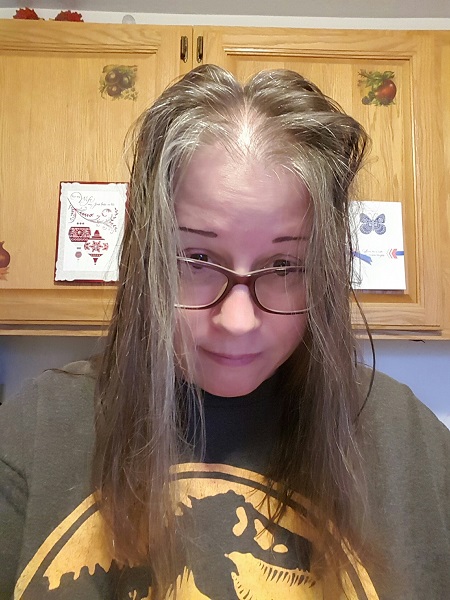 That is also my real skin. too. No makeup at all (except penciled eyebrows, stopped growing eyebrows years ago), never mask or exfoliate, no cover ups of any kind, just the barest bit of Johnson's baby lotion because, again, I'm allergic to everything. Several years ago I had to be crashed off birth control (and then crashed off my thyroid med for a couple of months), and after I went through all that, a gyno specialist told me I'd start to see some aging now. I was on birth control for about 25 years, and controlled hormones have a lot to do with skin anti-aging or something. He's right, I've seen a little aging since then, but other people can't tell because I'm supposed to look older than this. I'm the only one in my family who's been able to tolerate birth control (we're all PCOS), but it wreaked havoc with my blood pressure and we finally just couldn't control it any more with meds. HOWEVER. My skin did not look this good until the last couple of years. It looked very unhealthy and gross because my overall health wasn't good, which leads to the next paragraph.

My diabetes is more controlled than it's ever been because I've become so used to naturally watching what I eat. (Remember, a doctor pulled me off meds because I'm so med intolerant.) My fasting glucose regularly ranges from 84-96 without even trying, but I still spike real bad if I eat the wrong stuff, so I can't just munch out willy nilly. Because my blood sugar stays in the normal range throughout the day (rarely goes over 140 on a snacky day, usually 130 tops after eating, and I know this because I test), I continue to have a much easier time with headaches, joint pains, and whatever viruses are going around than I used to in the old days when I was more miserable all the time. Also, I've noted on this blog what a huge difference keeping my blood sugar down has made on my anxiety, which in the past has been noted many times as "severe". All these things being so positively impacted by diet control means I can handle getting through every day with far less medication nowadays, which is awesome, despite what I'm about to write in the next paragraph.

My fibromyalgia has always been documented as "severe", but over this last year, several assessments during therapy programs have noted a strong fibrotic response (scarring throughout my tissues) that will probably need to be maintained regularly (deep tissue work to keep it microfissured as my muscles harden), several areas down both arms that had developed nerve entrapment (requiring deep soft tissue work), and "moderate" to "significant" localized arthritis in my spine (requiring more core strength and flexibility training). So far nothing terrible or immediately worrisome (although hella painful), but definitely will cripple me back up if I don't stay on it. When I first started therapies about 4 years ago and saw improvement, I thought each improvement would be another solid step up, but I'm finding out that reconditioning and healing aren't permanent unless they are regularly maintained. If I don't want to be crippled again, like I was from summer 2007 to summer 2014 (yes, that's how long I was descending and fighting my way back out of complete immobility), it's up to me to stay on top of being able to keep moving for the rest of my life. I know from hard experience that not a single one of the handfuls of meds they had me on for years stopped any of that, and I wound up having to get off all that stuff just to become functional again. I'm happy to say this last year has been my most functional ever since 2004.

Bringing up 2004 opens the door for cognitive assessment, because that was the year I went through brain fail and finally had to quit work and could barely handle going back to college for one semester afterward. I went from brainiac to ignoramous in a few short weeks, thanks to a viral infection that hit my nervous system and affected brain function. I lived with severe brain fog and memory problems for years afterward, but over this last year have started seeing remarkable improvement in capability and function. I still go through some brain fog and short term memory deficit when I'm tired, but considering how difficult it was to string sentences together into paragraphs and make a single blog post around this time 3 years ago (I really like that post, I'm glad I wrote it, took hours), I feel like I'm in the fast lane now, even though I haven't yet gotten back to what I was capable of before 2004. What I'm saying is, the sentences fly out on their own now. I don't have to think about it any more. I still make loads of typos, but after several paragraphs fly out of my fingers, I just laugh now.

The next bit is my favorite. I haven't gone autoimmune all year. I even got permission from my doctor to try to go autoimmune, really push myself and see if I could flare up, and even though I hit a few hard walls, it just never happened. I still have to be careful about autoimmune hyper response around things that trigger allergic reactions, but so far so good, best year I've had in a very long time. I have to wonder if a lot of that is keeping my diabetes controlled. My body is healthier, so it's not falling all over itself over responding to stress and fatigue.

The reason I started this particular blog was because I needed some place to write the truth about the person behind the other blogs, where I do way more fun and distracting writing. I needed a place to practice learning how to say the hard stuff without being a drag. Over time it became a blog of hope. You guys really would not believe how crippled and ugly I got for several years. It was so terribly depressing, and I really did believe I was going to die soon. You know what? I decided I'm not dying yet. I'm not DONE yet. I have more to do, more to say, more to see and hear and know. I'm very lucky that we have internet nowadays to help me find information and figure out how to apply it to my own life.

I know it's hard. I know you might not believe me. But I also know there's hope. If you are not willing to give up what's killing you, that's your business and your choice. It's not a sin to die naturally from old age and illness and just getting worn out. But in case you aren't done yet, go back through this blog and follow me out of your hell. If you want this, you can do this. You've gotta want it more than anything. You'll have very hard days (but when do we not?) and feel discouraged (we feel that anyway) and sometimes you'll backslide (that part is really eye opening for seeing how far you've really come), but one day you'll wake up and go Wo, how. did. I. get. here???  I can breathe again, I can bend again, I can smile at people again. I can THINK again. There are some wonderful moments waiting for you down the hard road.

We can do this, guys.