Sometimes it's hard to tell what to do during a minor brain crash. I'll be all over the brain map, full of great ideas while I tool around to the fitness center and the grocery store and stuff, then get home and my brain falls out from a pain spike or fatigue wall or a blood sugar drop, and its all black again and there's just nothing. Sometimes I can't so much as construct a complete sentence, like I've had a stroke or something. I can't think to make the sentence, and my hand can't hold the pen well enough to write the words.

This month got a little hard again. Here came the nasty cold weather and holiday stress, and along with it came the nerve problems and the dumb. And the crying. I'd love to pop a pill and have some gooditude, but my chemicals just don't work that way. I fly blind, or I don't fly at all. But I'm not scared any more. I've already lived the scary stuff, already faced the sadness of loss. Now it feels like a race against time. To actually become capable again, to feel my brain come back on and my body work better, is a blessing. To sit around not making the most of every moment feels like an ignorant waste after the years I could barely function at all following my nervous system crashing. 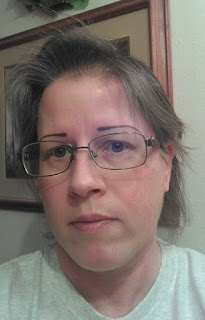 This month has felt like the Bell's palsy would come back. I had it really bad in 2004, most likely complicated with the nerve damage I already had from a car accident. Before the palsy hit the right side of my face, the 7th cranial and trigeminal nerves flared up in wicked pain, itching, and numb spots in the left side for 6 weeks, along with the worst migraine I'd ever had in my life, and when the right side finally drooped, I lost all tear production in the left side, and had stabbing pain in my left eye and ear and nostril for a couple of years, long after the droop on the right side healed back up. I get the left side nerve stuff flaring up again every little bit and go through spells of maddening itching or food tasting like sugar or everything smelling like gasoline or one of those really nasty nerve headaches, but the worst is losing being able to think. It got so bad the first year that I couldn't type a credit card number into the computer at the hotel where I worked. I had to hold my left thumb next to each number and whisper it to myself as I typed it, then move my thumb to the next number, and like that through all 16 digits. That was pretty tough to accept after being able to ace college bluebook essay finals from the raw memory of writing them out the night before. They checked me for strokes several times, just like they checked me for multiple sclerosis a few years after the accident- always nothing. No sign of damage, and I was able to hide it for so long that no one believed it when I finally lost everything and had to get disability. I have so many tricks for hiding my flaws, they're automatic and I barely even have to think about it, and most people just don't notice. But it's a pretty serious problem, nonetheless.
﻿


This was my worst brain day in all of December 2012. I really did crash again from a two hour streak of the old familiar brilliance and the joy that surged with it back to the empty nothingness of feeling like a pet fish with a brain the size of a speck. And I cried. But only for a few minutes. Then I got back up out of bed, moved my laptop to a different desk in a really dark room, and started making notes in my spiral. Sentence fragments. Dangling thoughts. I think I sort of remember the cool ideas I had earlier. I think I can reconstruct what I was thinking. I think, if I write down a word at a time and let them bump around a bit, that maybe, just maybe, the ideas I had can still come out somehow and be cool.


Like someone reconstructing an earthquake smashed mansion brick by broken brick without a plan, I am reconstructing my brain today. Like someone who lived in that mansion, I know I lived in my brain, and I know it's all still here. So I glitched again, so what. It's not gone. I just have to go over all the little connections and see what needs to be plugged back in. Some of the fragments kind of make sense. Some of them make sentences. Some of those will make paragraphs. I started writing this nearly five hours ago. I have made a hundred typos. I kept forgetting what I was doing. I lost my train of thought over and over. But here I am, at the other end of a post now, and I think I'm nearly ready to start working on the cool ideas I had for my other blogs. 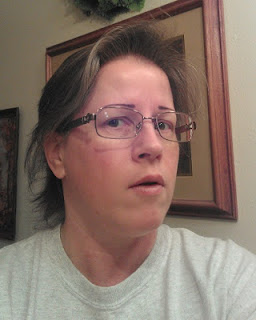 At least my hair is still growing.