ears-not-ears, that is the question 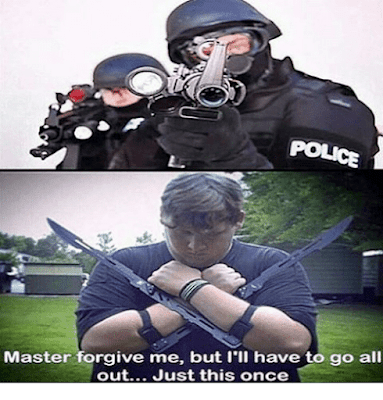 Was looking for a pain meme, but that was more like this week has really been, minus any police involvement.
Back on the big bad boys, the kind of pain meds they count suspiciously if you ask for more. Now that we're getting this ear pain mess figured out, it's time to go deep tissue again on some nasty fibro inflammation. This is THE SPOT that started it all in the big car wreck many years ago (how my neck didn't just snap I'll never know but thank you God), and after being in and out of therapy since 2011 and years of chiropractor before that, if this doesn't work I may finally cave to shots in my neck. The headaches have gotten a bit unreal again last few weeks, well, since the big back to back to back viruses all through January and part of February. Was already dealing with the inflammation around upper neck and jaw when that all hit, but since then it's been bad enough to keep triggering nausea and vertigo, and ENT ruled out ear causes for that. The vertigo is coming from pressure on nerves around my ears from all the muscles from collar bone up to skull going almost rock hard in weeks/months of super fibro flare and that in turn creating inflammation locking up all the tissues with even more swelling, just loads of pressure on the old cranial nerve damaged areas, even though they've been healing for years. I dunno if there is such a thing as nerve arthritis, but it sure feels like that. Anyway, now that we're addressing it, the nausea is clearly from pain levels. My pain level has been so high this week that it's setting off migraines, nasty vicious loop cycle we're hopefully breaking through.
So yeah, primary put me on the kind of tramadol dose like you just got out of major surgery. I'm breaking them in half and spacing them out so they'll last longer and I won't have to ask for more before therapy is over.
Other than that I seem to be doing fine. And the therapy must be helping because I'm noticing an increase in chores getting done.
I still have this note taped on the back of my bedroom door from years and years ago before I got all my stuff disentangled. I didn't have the greatest doctors and I wasn't very good at communicating, and during the worst of it I wound up in 3 month cycles of antibiotics and handfuls of pain meds for several years before I finally took the reins on my own healthcare. This was my first step as a person on autism spectrum learning to assess myself during lengthy confusing muddles through lupus flareups, severe depression, and whatever else popped up that kept getting mismanaged by not the greatest doctors, which included failing to diagnose diabetes.

If you are experiencing any of the following, you may be sick and not just "feeling rough".
If ALL these things are happening together, stay focused on needing a doctor appointment.

The problem with basic healthcare nowadays is that it has become so streamlined and compartmentalized that it takes a very determined patient to spend extra time with all the right doctors and a level of persistence that will stay focused on ruling out underlying causes. Like my ear pain. I initially addressed that with my sleep doctor a year ago during allergy season and asked her to refer me to ENT because my ear pain would go up so much during CPAP use at night. That referral got moved so many times because of stupid covid, that office lost their 3 main doctors and the rest kept rotating through positive covid tests, and then I had to go out of town and later on I was the one stuck at home being sick. In the meantime, 3 different doctors during clinic visits for other things told me my ears looked fine and never offered to check anything further. ENT said if I wanted to I could get an MRI to rule out tumors, but that's a long shot and I've had so many MRIs over the years, my history is clearly more indicative of fibro inflammation around old injuries. But it took nearly a year just to get a specialist to say it was inflammation around my jaws putting pressure on my ears. And after that it was up to me to ask primary for a referral to physical therapy because ENT wouldn't go any further than saying that area is more for a dentist to look into. I've already lived through decades of this, so that was a big fat fail, but at least ENT ruled out ear involvement causing the ear pain.
See what I mean? It really does take focus and grit being a long term chronic patient, especially on spectrum with noted depression. They call me a 'frequent flyer' because I don't just go home and pop pain pills and drink myself to sleep. In years past doctors would throw antibiotics at me misinterpreting the pain and 'swelling' around my glands under my jaw, turns out it was fibro inflammation. Imagine years of that. So me stepping up and taking charge of self assessing and then deciding who I make appointments with for very specific reasons has been what has gotten me off handfuls of meds every day, back on my feet and out of handicap spots, and apparently on top of controlling lupus flares since the last one was 8 years ago.
Posted by Janika at 4:55 PM