blinking in the light 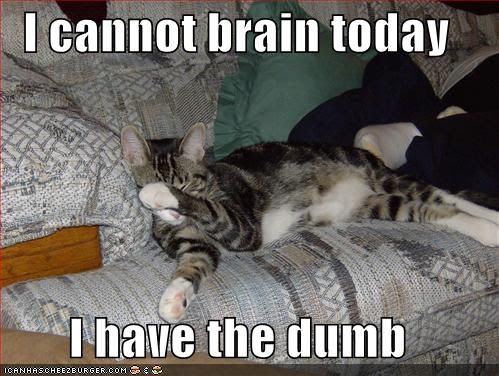 I have never blogged about this anywhere. I've mentioned stuff in passing, but I've never really been honest. It is really hard to be honest about stuff sometimes when you get down to the very last thing you have left.

I suppose it's kinda like a really beautiful woman suffering from a life changing deformity or something. Or maybe it's like an athlete getting a career stopping injury. With me, Scott says it's been like Flowers for Algernon, only I started out super smart in the first place.

I have an awesome brain. It has gotten me through things that crumble other people. I got through a weirdly abusive childhood and skated past depression that would have most teens going down very self destructive paths. I have gotten through some pretty rough stuff as an adult that would have most people my age at the very least addicted to something. One thing that seems to shine during some of my therapy sessions with my psychologist is that I'm able to compartmentalize all kinds of things in my head.

I had a very nasty car wreck when I was 19. I've been dealing with hiding disability problems the rest of my life. I absolutely refused to admit or acknowledge I couldn't do some things for a long time. Maybe I'd just have to do them more slowly, or find other ways to get them done. Most people have never known the pain I've lived with, or know very little of it. Even Scott didn't know how bad it was the first 15 years we were married.

Things started crumbling apart in 2004 when I got Bell's palsy really bad. It wasn't typical at all, and between that car accident and an untreated Lyme infection as a teen, it would probably have been no surprise if I'd had a better doctor. I got very sick and had to quit work quite suddenly, but the palsy itself didn't show up for two more months. I couldn't drive for 4 months after it hit, and had ongoing pain and symptoms for years after the paralysis went away.

Along with the usual glitches, like losing the ability to taste my food or smell things properly, my migraines became so severe that I prayed to go blind and deaf if only it would ease the pain in the trigeminal nerves around my face. Over several years I lost the ability to do simple math or read more than one paragraph in a book at a time. I had to completely stop watching tv for two years. I managed to keep working for two more years, finding ways to hide my growing cognitive deficiencies. I even talked to my doctor about becoming a nondriver, because I was making such poor traffic decisions that I couldn't believe I hadn't had any accidents.

Whatever was going on also impacted my immune system. I picked up every little germ and blew it way out of proportion, taking weeks and even months to get over what most people handle in a week. I started having medication reactions and had a very scary reaction during an MRI to gadolinium contrast. I became so weak I could barely walk around my house for months, and eventually suffered an injury while trying to walk across my yard and couldn't walk at all without handfuls of medications for several months.

I knew in my 20's that I might have to face CNS Lupus. I was cleared of multiple sclerosis back then, but wound up getting other labels. I've spent my adult life hiding all kinds of medical problems from everyone around me. But in 2008 it got pretty clear I can't hide this any more. They kept saying it's not lupus doing this, I don't have lesions on my nerves or brain, but no one had a clue what to do with me because all the symptoms were there.

My brain fell out. I couldn't even hide my cognitive difficulties any more. My Asperger traits that I'd managed to sort of hide throughout my life surged forward and took over. By 2009 I was granted complete disability. At the time I was deliriously thrilled that I could bawl my eyes out over that, since I hadn't been able to produce tears from onset of the Bell's palsy until around 2008, and then only a tear at a time that shot nerve pain around my face like crazy. I seriously did not cry a tear for 4 years because I couldn't. I went through eye drops like you wouldn't believe.

By 2010 I had accepted that I'd probably never get my brain back. By this time I'd been on daily steroid for months and was crashing so bad on medication problems that I started getting off everything I could. Nothing was helping the pain, nothing was making it easier to live any more, so what difference would it make? It was all I could do to drive in to see my psychologist, which is about the only time I drove at all because the pain and cognitive difficulty were so bad. Scott bought all the groceries, helped me in and out of the shower, did everything for me.

I've been through some really hard stuff in my life. People I love have died. I don't travel well and can't handle car trips and vacations. I couldn't even get out in the sun for 10 minutes without breaking out in itchy boils. I couldn't go to work, or go have lunch with friends, or enjoy holidays. But I think the hardest thing I've had to face is watching my mind shut down. It's very hard knowing how dumb you have become when you sort of vaguely remember how smart you once were. The depression finally hit me, and it was so cruel.

I know now that I didn't have to go through all that by myself. I'm learning how to use my Asperger's to solve new problems now. I have an edge a lot of people don't have. I have my brain...

I'm learning that it's not the content of my brain that makes a person really smart. What makes a person smart is adaptability, flexibility, being able to use what you've got and create workarounds. I still have a really hard time with math. I aced college algebra on my first try taking the tests with an ink pen. Now I have to use a calculator to balance my checkbook, and I still get it wrong. The govt appointed Scott to be in charge of my finances. You'd think that's a given, he's my husband, but no, that means I can't legally be held responsible to do it myself. I still get confused in traffic, and get lost in stores. But something changed, and my brain is lighting back up again.


12 And after the earthquake a fire; but the Lord was not in the fire: and after the fire a still small voice.


13 And it was so, when Elijah heard it, that he wrapped his face in his mantle, and went out, and stood in the entering in of the cave. And, behold, there came a voice unto him, and said, What doest thou here, Elijah?


I'm not a church person. I grew up in church, but I haven't been able to sit in one for years. I didn't put that quote there because I got any kind of revelation. It was more like I finally just let go and said God, you do it, I'm too tiny and I hurt too bad and I can't. Heal me. Make me good for people, because otherwise my life has become worthless.


I can't even begin to describe the last couple of years. It's been hard, and scary, but more like being belched out of a broken mountain and thrown out onto the grass, laying there blinking in the light, moving a little at a time, sort of remembering who I am.


What I do now is me rejoicing that I have so far survived all of this and can once again create with joy. I wonder what I can get done before I have to let go again.

Right now just sitting up in the grass seems wonderful.

So a note in passing, in case anyone ever wondered, all the bright colors on dark background on most of my websites was so *I* could see my own work.
Posted by Janika at 3:28 PM